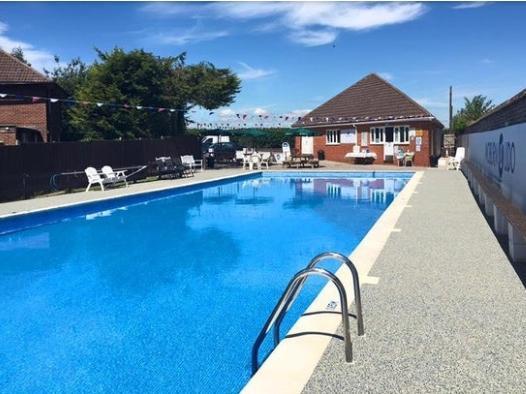 Woburn Lido is desperately trying to stem the flood of enquiries for outdoor swimming sessions since it reopened on Saturday, August 1.

With the scorching summer temperatures, trustee Murray Heining says he has received thousands of calls and emails, with no chance of meeting the demand – especially with Covid-19 restrictions in place meaning a limited number of families per session.

The lido, on Crawley Road, has a swimming pool and plenty of space for picnics and sunbathing on the pool’s grassed area, but was closed for several months during the coronavirus lockdown.

Murray said on Friday: “We have been ridiculously busy with calls and enquiries for the pool. We got the go ahead to open at short notice and we had the pool water tested and we opened on Saturday, August 1.

“We announced the news last Thursday evening and I was flooded with enquiries, I had over 2,000 emails, and today I have already had 750.

“It has been crazy, we have no availability for family sessions through until the end of next week.

“We are running with COVID secure measure in place, there is a maximum capacity for the pool for the lane swim an senior citizen sessions, and for the family session, the pool is split in two and there are a maximum of four families/households, two in each half.

“They create bubbles, and it is a maximum of ten in each half. The sessions are an hour and a half long.

“Comparing this to last year, at a similar time in the hot weather, we would have had between 300 and 400 people in the pool throughout the day, now it’s three family sessions a day, which is 12 families.

“We have very few slots and far too many enquiries, it is a first come, first serve basis.

“We do have sessions at 12.15 every day for over 60s and we are keen to promote those, I think that age group probably felt the most isolated during the lockdown, so it is good for them to be able to come out and enjoy an activity like this.

“Those who have been, have really enjoyed it and have booked on for another session.”

Woburn Lido has implemented a number of measures to make it safe for swimmers.

Murray added: “We have no changing rooms open and there is one toilet, which you have to access permission for and it is cleaned after each use.

“The shop is closed and nothing is being sold on site, it is just a swimming pool for this season.

“We are aware that we could be given short notice to close if the Government sees spiked in cases, but we are planning to stay open until the schools go back in September.”

Last year, Woburn Lido was on the brink of closure until it appointed new trustees and volunteers to take on the management of the facility.

A new committee was formed in November and things are now looking bright for the Lido.

Murray added: “We have had to make some changes but some of those enforced by the COVID-19 restrictions may form part of a new model for the future of the Lido.

“For example, before the hour and a half sessions, people would come first thing in the morning and spend the whole day here, now with the shorter time slots, more people can come and use the pool.”