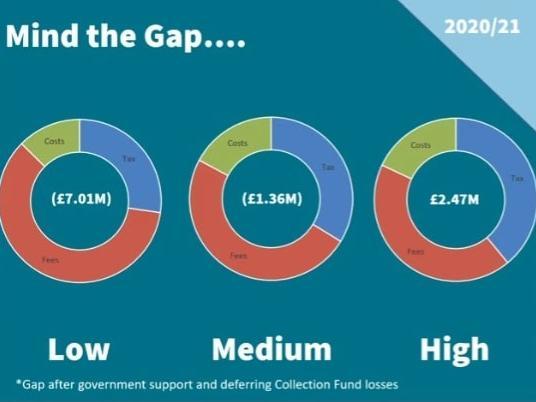 Decisions are due to be made in the next few weeks which could see the first cuts made to services in response to the coronavirus crisis.

The council’s income from car parking has been hit to the tune of £7 million after shoppers and employees stayed at home during lockdown.

MK Council uses money from parking to subsidise bus services and does not see levels returning to pre-lockdown levels.

“Help to lobby the Government would be very much appreciated,” said Cllr Rob Middleton (Lab, Wolverton), the council’s cabinet member for the budget at Tuesday’s budget and resources scrutiny committee.

The council has received so much financial and accounting support from the Government in 2020-21 that it hopes to be able to balance the budget this year.

Without help, the council would be facing a hole of between £25 million and £57 million in this financial year alone, the meeting heard.

But Cllr Middleton said this leaves “huge uncertainty” for the years up to 2024-25, where the medium-term budget gap could be between a whopping £38 million and an eye-watering £59 million.

“We are thankful for the support up to now but we need a three or four year settlement,” he said.

“Central Government needs to step up and give local government some certainty.”

The council is expecting to hear news on its settlement in December but he says “this is simply not good enough” because by then they council would have made decisions about its budget.

“It is deeply concerning that cuts are proposed to bus services,” he said. “They are used by low-income families and young people, and it would be a concern.”

Cllr Rankine added that if bus driving was considered a “green job” it would qualify for some of the council’s planned recovery money.

“We can’t bank on being bailed out by central Government,” he added.

He argued for a plan for attracting more investment into the city, and for a “fundamental shift in the relationship with business.”

The council is working on plans to sell off some of its 164 buildings, put services online, and find more ways of raising income, the meeting heard.

It has also introduced a recruitment freeze and saved £500,000 from a management ‘restructure’.

The committee agreed to lobby the Government for more funding, with Cllr Peter Geary (Cons, Olney) saying: “We should be writing to our MPs and anyone else in Government.

But he urged the Labour-led council to “come across in a constructive and not a destructive way” when approaches are made to the city’s two Tory MPs, and the Conservative Government.